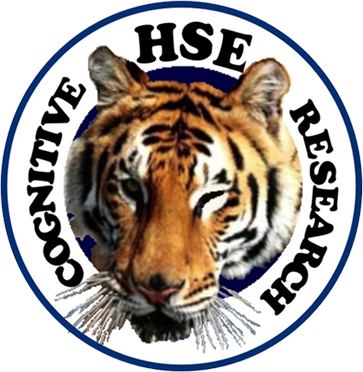 A new paper by Igor Utochkin and Maria Yurevich has recently appeared online in Journal of Experimental Psychology: Human Perception and Performance. The paper is entitled "Similarity and heterogeneity effects in visual search is mediated by "segmentability"".

It is well known from previous studies that similarity between items has a great impact on how easy you see the target. In particular, the more similar background elements (nontargets), the easier it is to notice the figure, that is, to find a target. That also means that the more different features there are among the nontargets (which is referred to as nontarget heterogeneity) nontargets are, the harder it is to find the target - it is simply because greater heterogeneity implies greater dissimilarity (or poorer similarity).

But it is not always the case. Utochkin and Yurevich manipulated similarity and heterogeneity in a somewhat opposite way, such that increasing heterogeneity led to increasing similarity rather than decreasing it. How did they do it? It was achieved by using so called transition features. For example, you have 20 lines as nontargets and one line as a target. Nontarget orientation ranges between 0 (vertical) and 45 degrees to the left, while the target is a 45-deg. right-tilted line. You can make your nontargets consisting of ten 0-deg. and ten 45-deg. lines - in this case you have low heterogeneity (only two features are enabled with ten instances per feature) and low similarity (0 and 45 degrees look rather dissimilar). But you also can make a transition between 0- and 45-deg. nontargets by adding a number of lines of intermediate orientations - say, two 0-deg., two 5-deg., two 10-deg, and so on - and you will have greater heterogeneity (ten features with two instances per feature) and greater similarity (because the average difference between any pair of items will be smaller).

When Utochkin and Yurevich came up with this manipulation with transition, they discovered an interesting result. Transition features tended to make visual seacrh easier than only extreme ones, but this works only for "smooth" transition - when a lot of different features were used with a small step of transition (e.g. 5 degrees like in the above example). In contrast, when the transition was "sharp" (only one transition feature is inserted between the extremes and, hence, a rather big difference with both neighbors - more than 20 degrees) it impaired visual search.

So the effect of transition features on visual search appears to be non-monotonic and cannot be explained by either similarity, or heterogeneity alone. Utochkin and Yurevich suggested a concept "segmentability" to explain their results. In small transition, non-targets are hardly distinguishable en masse due to the small average difference and they are likely to be grouped together, which makes it easier to find a single odd item - the target. When transition is sharp, the difference between features is more evident due to bigger average differences, and that makes separate subsets of items into chunks. As a result, our decision about the presence or absence of an odd item requires serial rejection of three spatially irregular and overlapping groups.